Single Sign-on With Keycloak on Kubernetes

So I have a few services running in my private “cloud”. If I told you that it’s just a single VPS at Hetzner I would not longer be able to call it “cloud”, so please forget what I just said. ;)

Anyway, I currently have a few different “user-facing” services running:

What annoyed me is the requirement to have a separate login for each service. So save a few minutes I decided to spend a few days to research and set up Single Sign-On for all these services.

Single Sign-On (or SSO for short) means that multiple services are protected behind the same login. Note that this does not mean to just have the same password for every service. Instead, logging in to one service means you are effectively logged in to all other services as well, without the need to authenticate again. You most likely know this from Google: When you log in to your GMail account, you are automatically also logged in to Calendar, Youtube, Google Docs etc.

SSO requires a central authentication provider that your services can authenticate against. Often (also in case of Google), this is handled by the OpenID Connect protocol, which sits on top of OAuth 2.0. I will not go into more detail about this, but instead link to to a an awesome writeup by Micah Silverman from Okta who wrote a detailed explanation of OpenID connect: Link. Make sure to read all parts!

At this point, the steps were clear:

In the end, I saw that the landscape here is not too crowded and found two solution that fit the bill:

In the end, I decided on Keycloak. The main reason was that Gluu used MongoDB as its backend database, while Keycloak supports any RDBMS. The reasoning is thin, but I just prefer PostgreSQL to MongoDB.

Keycloak also supports user federation and can be used with any LDAP server. They recommend to use LDAP instead of the built-in RDBMS for scalability, but this is not a problem I am currently facing, so I’ll stick to a simple setup. In the future this might be a good starting point to dive into FreeIPA …

Keycloak provides ready-made Docker images for the keycloak server, and I set it up with PostgreSQL as its backing database. On kubernetes, the setup is really straight-forward:

Handling of VolumeClaims and setup of services/ingress is left as an exercise to the Kubernetes admin.

One kubectl apply later (done automatically via Drone of course!), I logged into keycloak as the admin and was greeted with the admin interface: 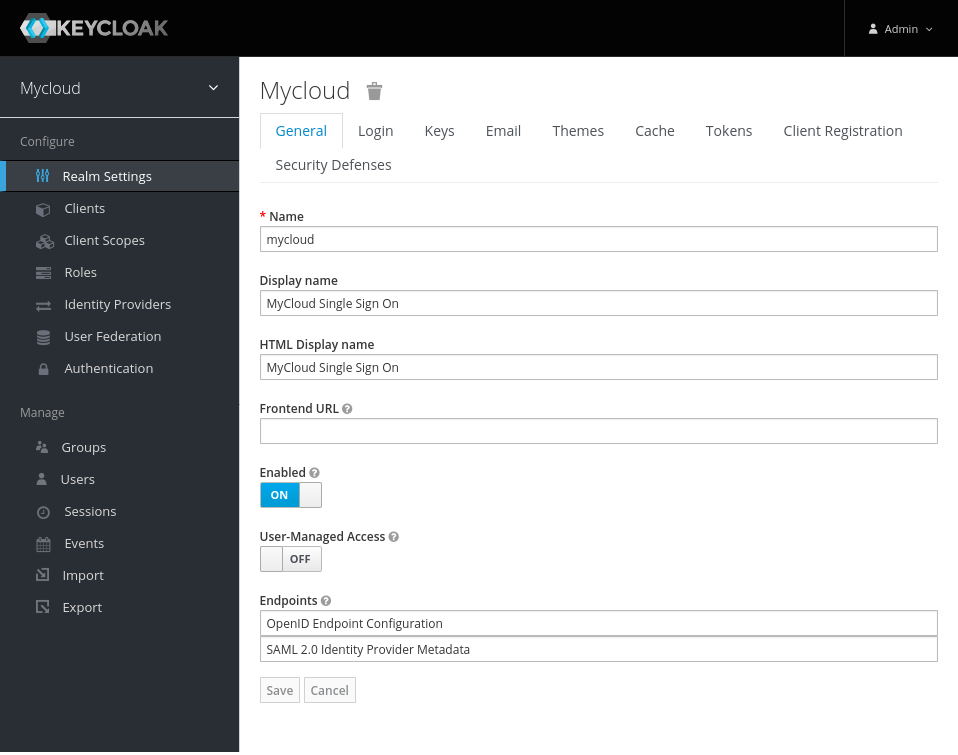 Keycloak has an excellent documentation that explains all concepts behind Keycloak and guides you through all menus and settings. I highly recommend to read through it (yes, it’s a lot).

I will not go into too much detail about the keycloak setup here. Because it’s mostly configured via Web UI, this would just lead to a heap of screenshots. While I really like graphical configuration for its discoverability, I much prefer textual config, which can be tracked in git, shared, reviewed, automated and so on. When my setup is a bit more stable, I plan to migrate the Keycloak configuration to Terraform with the Terraform provider for Keycloak

As a brief summary, I did the following in Keycloak:

That’s it for the Keycloak setup! Now it’s time to convince some services to authenticate against it …

The first clients I migrated were the ones that already have OpenID Connect support built-in, which were Gitea and Miniflux. Because I had to take a few hurdles along the way, I’ll describe their setup briefly.

Gitea unfortunately does not offer any means to set the OIDC provider using the configuration file or environment variables. Instead, you have to go the the “Site Administration” menu and create a new provider under “Authentication Sources”: 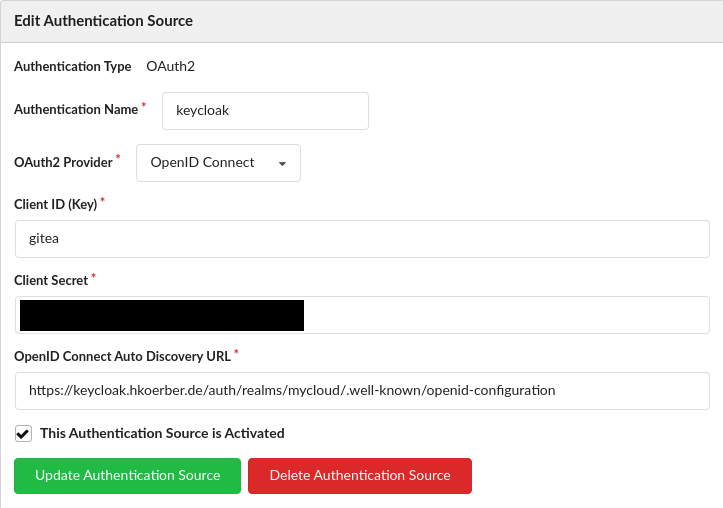 You can see here that I chose keycloak for the name of the authentication provider. Gitea will always use /user/oauth2/<name>/callback as the callback URL path, so in Keycloak I specified https://code.hkoerber.de/user/oauth2/keycloak/callback as the only valid redirect URL.

This is already enough the enable OpenID login in Gitea: 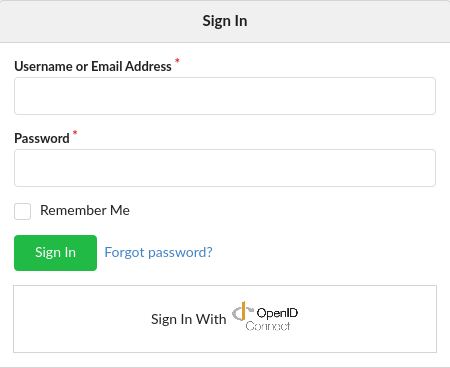 I wanted to manage Gitea users only via OpenID. This needed a few settings in Gitea’s app.ini:

That’s it for Gitea. The next service is Miniflux, the RSS reader.

According to the Miniflux documentation, “Only google is supported” as an OAuth provider.1. Fortunately, GitHub user @pmarschik added support for generic OpenID Connect providers in this pull request.

In the logs, I only got the following message:

This error can only be caused at a single place in the code, at oauth2/manager.go2

This method looks for a new provider in the m.providers map of a Manager object with a certain name. The Manager object and its providers are initialized just a few lines further down3:

The important line is this one:

We see that the key in the providers map is oidc. So why is it not found? Where does the name parmater to Provider() actually come from?

It turns out that the name is actually extracted from the URL path. The callback request is handled in a method called oauth2Redirect() in ui/oauth2_callback.go4

Here is the call to Provider():

And provider is set a bit further above:

If we look at the method signature, we see that r is a pointer to the http.Request:

The oauth2Redirect() method is called by the Go HTTP Router according to the following handler, found in ui/ui.go5:

And there we are. We have an invariant in our OIDC configuration: The second part of the path of OAUTH2_REDIRECT_URL has to match the value of OAUTH2_PROVIDER (oidc in this case). This was of course violated when using /oauth2/keycloak/callback as the callback URL’s path.

With the correct values set (see above), all is well and authentication works like a charm.

That’s it! Now all the applications are authenticating against the central Keycloak instance. Only one password to remember (I mean, put into the password manager of course). Stuff like two-factor authencation can be managed in Keycloak (it supports TOTP via Google Authenticatior for example).

There will be a follow-up post, because I’m not yet done: What about applications that do not support OpenID Connect themselves?